All of the previous pieces had much better build process/detail photos than all the remainders.  For the most part I was either rushing these parts as the convention was racing up in me or they were done earlier in the process when I wasn’t taking as many photos.

Reference photo, this time from the .Hack//Trilogy movie.

These cannibalized a pair of boots that I didn’t like all that much, they were clipped down to fit the height of the shoe.  I added a bit of pleather to the top to hide the edges caused by cutting the boot down, however most of this is hidden by the shoe armour.

The front is very similar to the bracers (Part 2), shape and piping wise.  I do not suggest using pen marks on wonderflex, the gesso didn’t cover it for many layers.  The back is a simple loop with little arms that extend down, edging went down on the back part after this photo was taken. 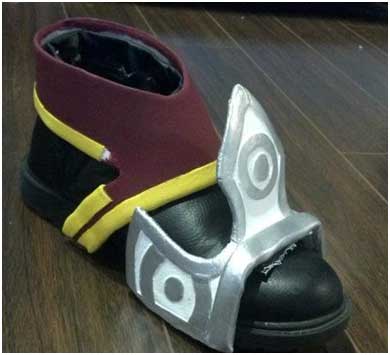 Gessoed + painted. Acrylic paint for the back part, then rub n’ buff for the front again.  These are not glued to the shoes, they clip on with a series of elastics and velcro. 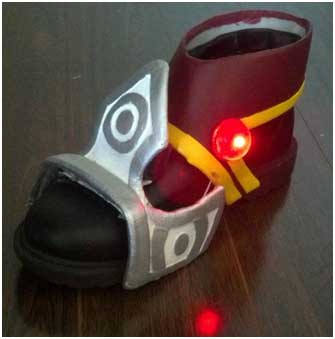 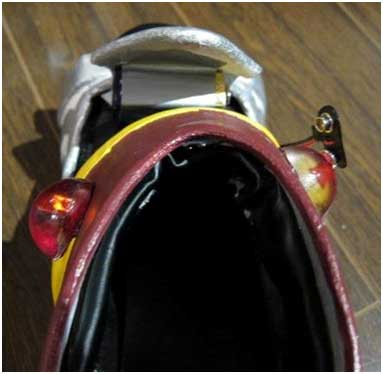 A quick picture showing where each battery pack (9V) was hidden.  each shoe had its own.  The gems certainly look funny from this angle when not lit up. 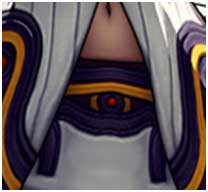 Reference photo.  The design was edited a bit to compensate for the size of my gems.

Photos of this piece are after the con, so they do display the wear created during the convention.

Due to the placement of this piece (and the fact that I was out of wonderflex by this point) this was built out of foam.  The foam was covered in three layers of mod podge to seal it then painted in the same fashion as the other pieces. 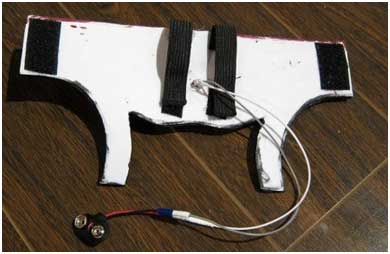 Front and back respectively.

The bends in the ‘legs’ are from the convention, not too bad for a piece in such an area.

The circuit for this clipped into one of the battery packs hidden in the thigh pieces (Part 1).  It velcroed on to the belt to keep it flat against my body and strapped around it with some elastic and velcro.  Simple enough design.