Blah blah blah <excuses>.  I moved, took a few courses… and now I’m back in gear for 6 months.  I’ll yammer about last year then go get my butt going on this year’s projects.  My cat also passed away, which took away a lot of time from my life (you can see him trying to “help” with my sheaths a bit later on).

This post will discuss how both cases were made and I’ll make another post for the final Kirito details, including how I got the sheathes to free hang from my back. 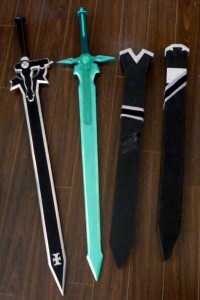 This photo again, getting sick of seeing it yet?

This case was spawned from an over whelming need to use the four rolls of worbla I had purchased in some sort of way (currently it is over a year since I purchased the worbla for this project, I still own 2.5 sheets but it will be put to good use shortly).  At this point I was also sick of dealing with wood as a result of my issues with filing the Elucidator. 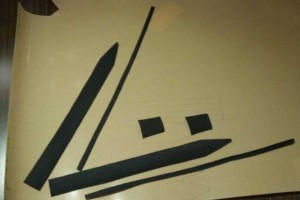 The pieces were cut, and I went about sealing the foam in inside the worbla.  It was at the point I started to worry about how strong and secure it would be, just the foam seemed a bit wiggly.  As a result I switched out using foam in the sides in favour of balsa wood.  This meant that the sides were stronger and would stand well, this helped to make the case rather strong.  For those not familiar with thermo plastics for cosplay sealing/base covering is simply sealing a core material (normally foam) inside of the thermo plastic.

Once the base covering is completed I connected one side piece to each face piece.  The face pieces were kept flat on the floor to insure their shape.  To make sure that the sides were squared to one another I placed a square doweling against each connection I made.

Each side was then fabric lined and the two sides were connected, for this part I inserted the sword inside the piece to make sure the pieces correctly lined up.  The end was then closed off and the top was shaped properly.

The case was then covered in my new cosplay bff, spackling.  This stuff can be applied to anything to smooth it out.  It turns from pink to white when it is dry.  I covered the case in this then sanded it with a mouse sander with a low grit on my deck.  Make sure to wear a mask and clothing you hate when you do this, you will be covered in dust. 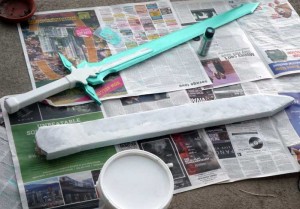 After this it was covered in gesso, sanded again up to a 220 grit then painted with black paint.  The black paint for this was slightly lighter than the sword, it was a lower quality (cheaper) paint made by Amsterdam.

Once the paint was dry the case was covered in a matte varnish.  I used stick on foamies to create the top details, covered them in rub n’ buff, buffed them and sealed them with future floor wax to keep their shine.

This case was spawned from a dislike of my worbla case at the time (it was half done) and an excess of foamboard from the Dark Repulser.  Of the two this case was much faster to put together.

The pieces were cut and glued together using hot glue.  Just like the worbla case they were felt/fleece lined to protect the paint job on my sword.  I had some issues with shaping the top portions and ended up having to sneek in some extra foamboard to make them fit the pommel on the Dark Repulser.

I covered the exposed foamboard texture on the sides of the case in paper clay and used this to cover up any small dents that had occurred during the building process.

There was no gesso applied to this case and only a bit of light sanding on the paper clay areas.  It was then painted with a lighter paint that the Elucidator’s case, covered first in Future floor wax to give it a hard coating then in matte varnish by liquitex.  Sticky foam was applied to the top to, covered in rub n’ buff, buffed, then sealed with future just like it was on the other case.

Which method to I prefer?

Both have their strengths; the foamboard case went together much faster, was much lighter and didn’t require much sanding beyond the paper clay I used to cover up the texture of the board’s siding, where as the worbla case was much stronger and I had few fears about my beloved Elucidator being protected inside it.  The worbla case took much longer and also cost about ten times as much to make (the foamboard case cost me maybe $3 to put together) it also took a lot of sanding work to be happy with.  The foamboard case was much weaker, could take damage (and did take a bit over 2 con days, a lot of rough handling and 6 months on my couch exposed to house guests).  The extent of this damage was a small bit of the clay covering on the foamboard peeling up, which was easily repaired.

If you have a wooden sword which is well sharpened and you don’t want to risk damage to, and have the money for worbla or wonderflex (either will work), go with a worbla or wood case (not discussed here, as I avoided building one).  If you have a wooden sword that you are not so deeply in love with, or isn’t very sharpened then a foamboard sheath will work for you, they go well with a foamboard sword and are very cheap.  Paint included the foamboard sword and sheath cost me maybe $15, but I’m likely over estimating.

My next post will deal with how I hung the sheaths from my back without the use of belts, strings or anything but the chest strap and other remaining details on this cosplay.